The Maidan Tower in Baku. A symbol of Azerbaijani history.

With the democratic transition of power progressing in Georgia, the focus of the regional and international community is increasingly shifting to the upcoming elections in Armenia and Azerbaijan. Notably, Azerbaijan has scheduled presidential elections for October 2013, which are regarded by many observers as crucial for the democratic development of the country.

Marion Kipiani was recently in Baku and she spoke with four experts about their perceptions of the political system, the upcoming elections, and the possible impacts of the change of government in Georgia on the electoral environment in Azerbaijan. The political and electoral systems in Azerbaijan are still under development, this was one of the few statements that the four experts unanimously agreed on.  Farhad Mammedov, Razi Nurullayev, Anar Mammadli and Arastun Orujlu tell her why.

Razi Nurullayev, Chairman of the Board of the “Region” International Analytical Centre (RIAC ) and Deputy chairman on International Affairs of the opposition Azerbaijan Popular Front Party, said the government and president are undertaking serious work to rebuild Azerbaijan into a modern country. However, Mr Nurullayev told us, the political system in the country is so bad that no single individual could possibly emerge as a “good” leader. Among the major obstacles to democratic development he identified the domination of the system of governance at all levels by the president’s New Azerbaijan Party (NAP) as well as the government’s attempts to deprive the opposition of resources. Nevertheless, Mr Nurullayev also noted that a major problem was the focus of all major political parties on personalities rather than ideologies and strategies. In this context, opposition political parties will need to shift their focus in order to convince the population of their policy positions and increase their public support.

In Mr Nurullayev’s view, the establishment of the “Public Chamber” opposition movement and its efforts toward fielding a single opposition candidate in the presidential elections permitted some reasonable hopes for competitive elections and a democratic transition of power.

Farhad Mammadov, Director of the Centre for Strategic Studies (SAM) under the President of the Republic of Azerbaijan, largely concurred with the analysis of the slow progress that political parties are undergoing in Azerbaijan to base themselves on ideologies rather than on charismatic leadership figures. But Mr Mammadov also stressed that popular support to the governing NAP was to a considerable degree due to effectiveness of its policies as well as to the fact that the opposition spends much of its time fighting amongst each other. Since 1998, he pointed out, the political opposition has gathered in coalitions – and subsequently split again – twelve times, thus leaving the population confused as to political alignments and policy positions of the opposition. Mr Mammadov noted that opposition parties have access to “four to five opposition-leaning internet TV stations and several popular newspapers” and that Azerbaijan’s legislation creates an environment conducive to democratic elections.

Therefore, if opposition parties and candidates have so far failed to gather considerable popular support, in Mr Mammadov’s view this is due to the fact that they do not present the population with a unified team and a credible vision for the future. NAP, on the contrary, despite being a political force with more than 500,000 members has always had a single candidate for presidential elections in its history and will in 2013 again be able to offer a coherent political platform addressing the major interests of the population: security, better living conditions, social security, education and economic growth outside the oil-and-gas sector.

The Director of the East-West Research Centre, Arastun Orujlu, discounted this analysis, saying Azerbaijan’s political system is lacking even fundamental “rules of the game”. He claimed that over the past decade, the government of Azerbaijan has been engaged in a systematic elimination of its political opponents both in practical and legal terms. With regard to the electoral environment, Mr Orujlu rhetorically asked how once could speak of democratic elections if the most basic preconditions of democracy, such as freedom of assembly and freedom of the media were absent. In particular, he singled out the stringent requirements for electoral contenders to collect signatures in support of their candidacy, which was prone to the disqualification of candidates due to supposedly invalid signatures and to the intimidation of supporters particularly in rural areas. Mr Orujlu questioned the unity of the NAP and said there was infighting within the government in the run-up to the 2013 presidential elections. However, he also reserved some criticism for the “Public Chamber” coalition of opposition forces. Mr Orujlu explained that the “Public Chamber” had been formed in November 2010 with an initial aim of having the results of the 2010 parliamentary elections cancelled. As such, it had been a movement for democratic reform unifying many segments of Azerbaijani society. However, Mr Orujlu regretted, with a view to the presidential elections the focus of the “Public Chamber” has shifted almost exclusively to discussions over a single opposition candidate, to the detriment of questions of a possible coalition strategy and electoral platform. In the process, the movement has been transformed into a field of struggle between the two largest opposition parties, Musavat and the Azerbaijan Popular Front Party. Mr Orujlu estimated real support of the government within Azerbaijani society as no more than 10-15 percent but said the opposition is currently unable to capitalize on this as it fails to express the hopes and ideas of a population largely disillusioned by the political class.

Anar Mammadli, chairman of the non-governmental organization Chairman of the Election Monitoring and Democracy Studies Centre (EMDSC), agreed that the amendments to election legislation made in 2008 and 2010 were problematic. Notably, these amendments concern the signature collection requirements for electoral candidates mentioned by Mr Orujlu, together with the abolishment of an alternative form of registering candidates by way of a deposit, and the gradual shortening of the electoral period from 120 to 60 calendar days. The by far largest problem, Mr Mammadli said, for the development of the political system in general is an all-encompassing corruption that affects all political processes. Together with deficiencies in the electoral process and restrictions on the freedom of assembly, this leads to the atrophy of public governance, to the population’s lack of trust in political actors and the decrease of civic activity as people focus on trying to improve their socio-economic conditions. Despite the current stagnation, however, Mr Mammadli judged the upcoming presidential elections to be a chance for renewed political dynamism in the country. He said the democratic transition of power in Georgia will have positive effects as a reference point to be used by politicians, media representatives and civic activists in Azerbaijan. This influence could be further strengthened if the international community would more strictly align its support to countries in the region according to their democratic achievements.

In general, Mr Mammadli noted, international attention should be raised about the electoral environment in Azerbaijan, and the country’s international partners should shift their approaches away from merely funding the work of civic organizations to increased political support of the democratization agenda. This is particularly necessary as the government has at its disposal instruments to lobby its interests on the international level. As a result, Mr Mammadli told us, not only civil society organizations within the country but also international bodies such as OSCE/ODIHR and the Council of Europe’s Venice Commission face difficulties accessing parliamentarians and the government of Azerbaijan for recommendations on electoral legislation. 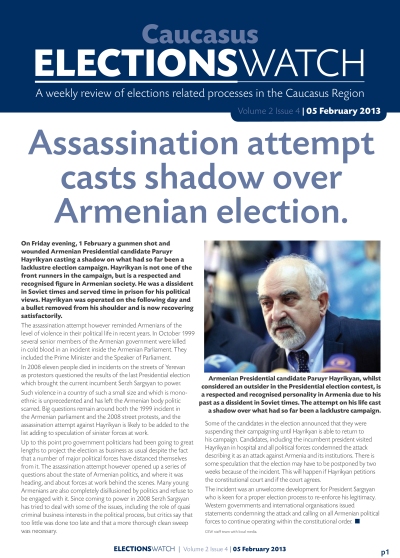 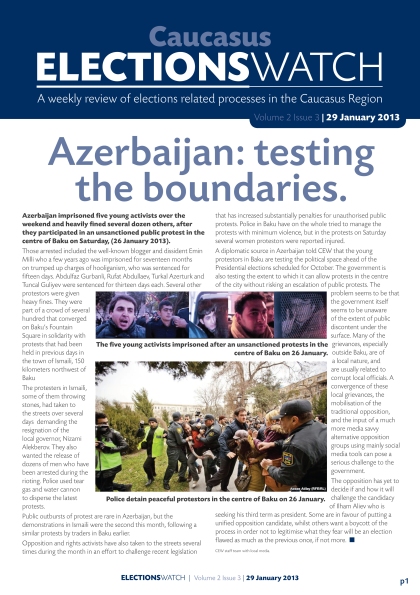 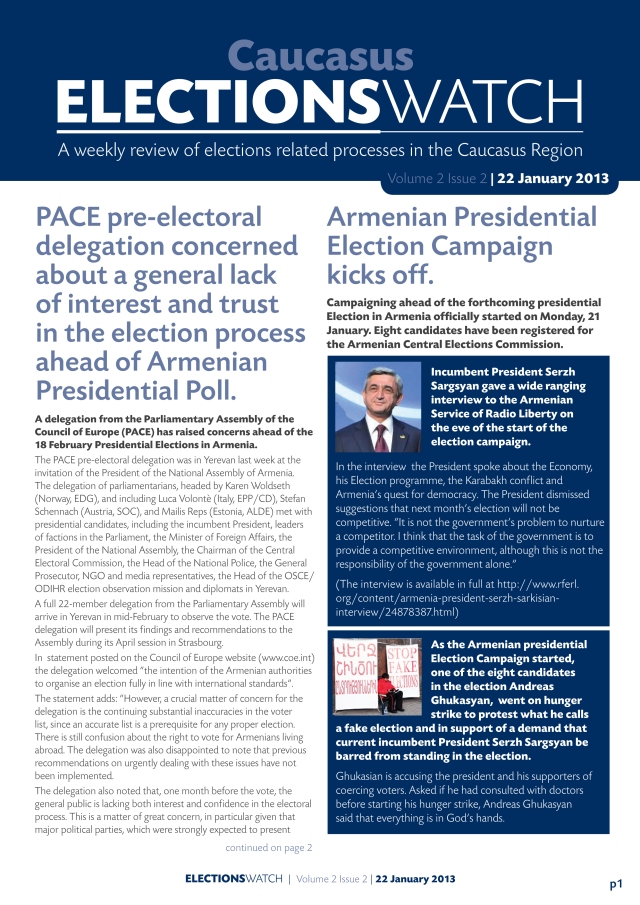 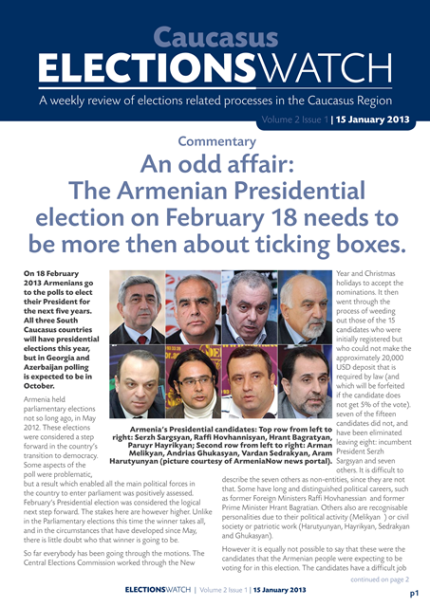 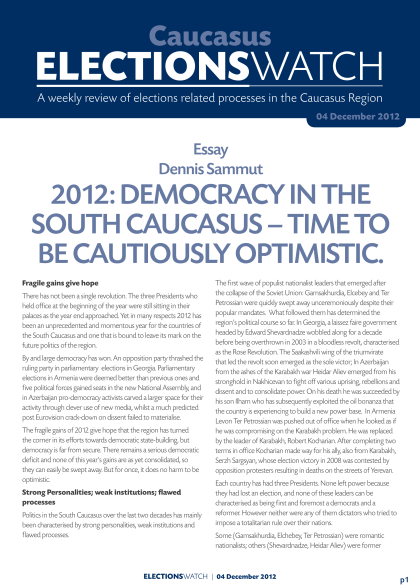 Read or download the full edition in pdf format 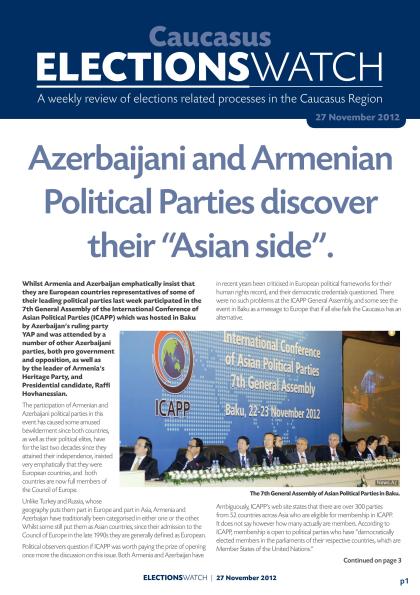 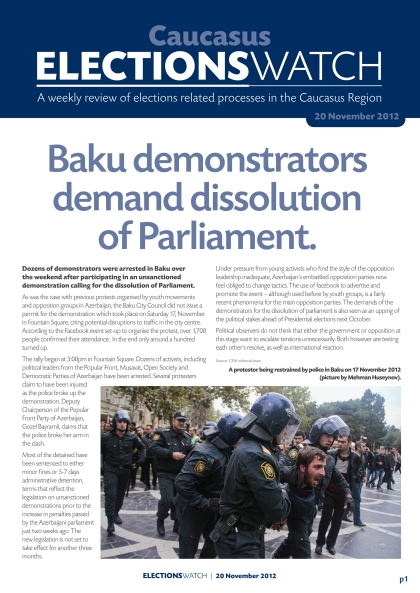 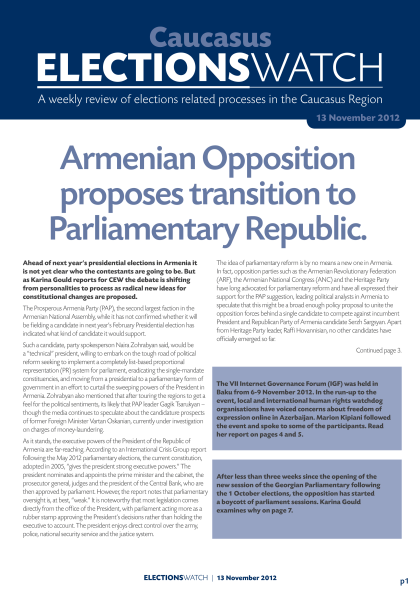 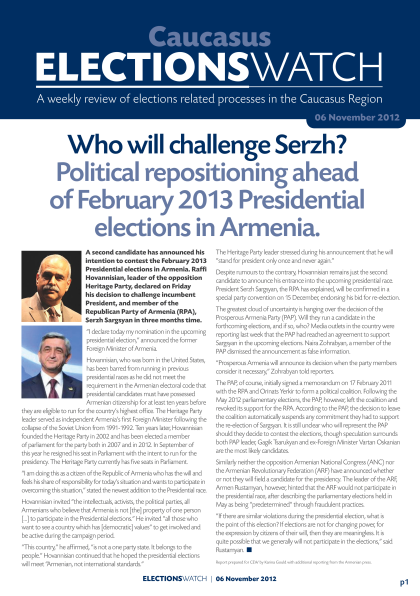 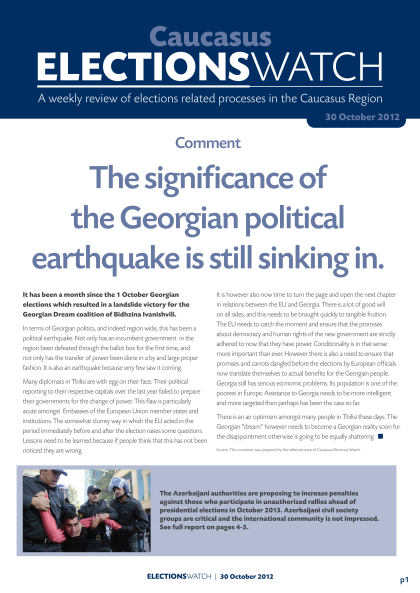 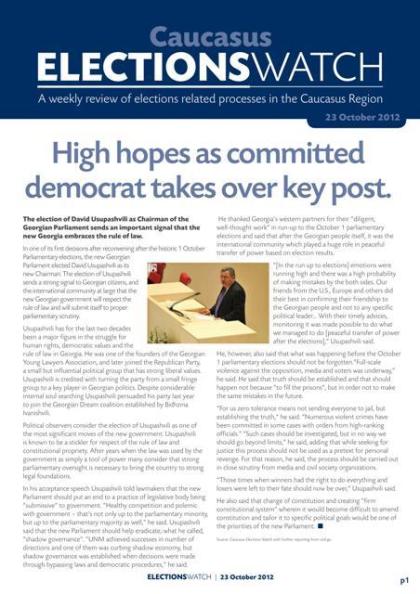 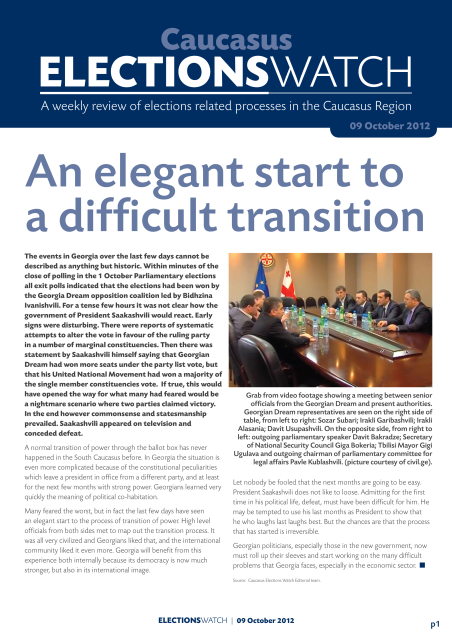 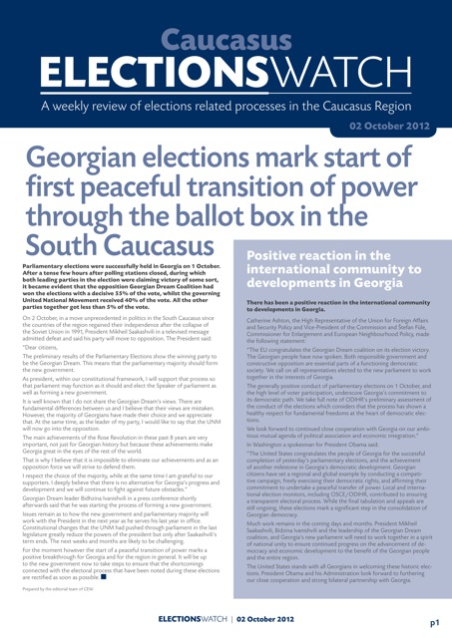 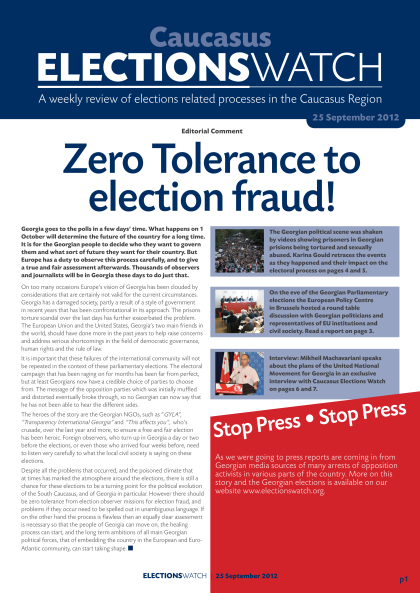 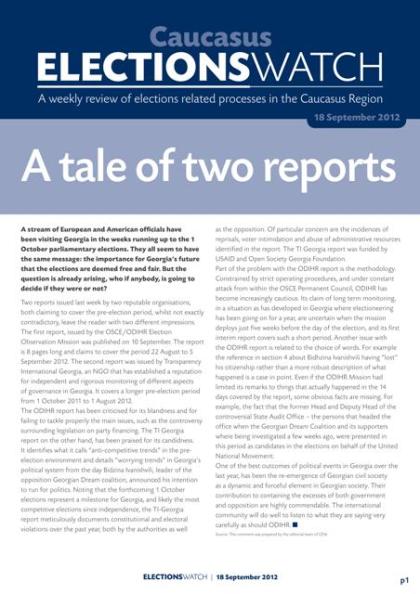 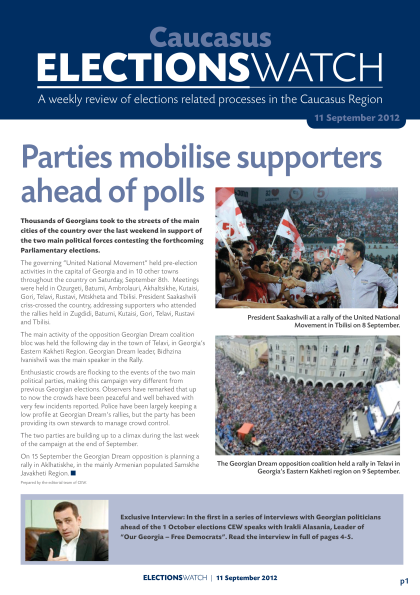 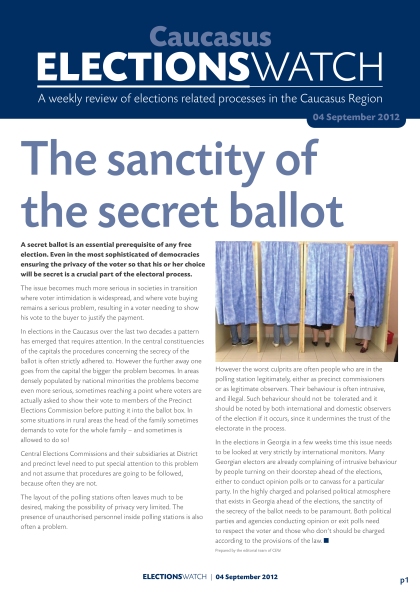 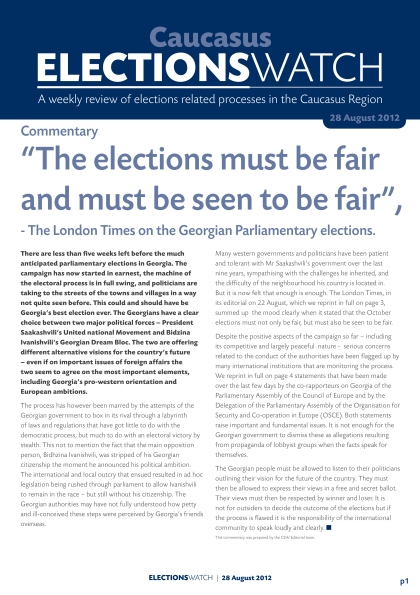 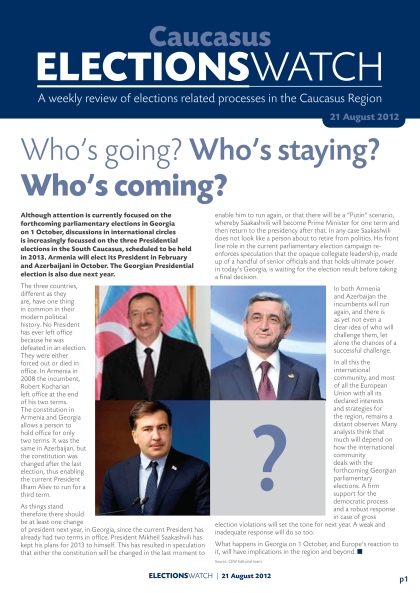 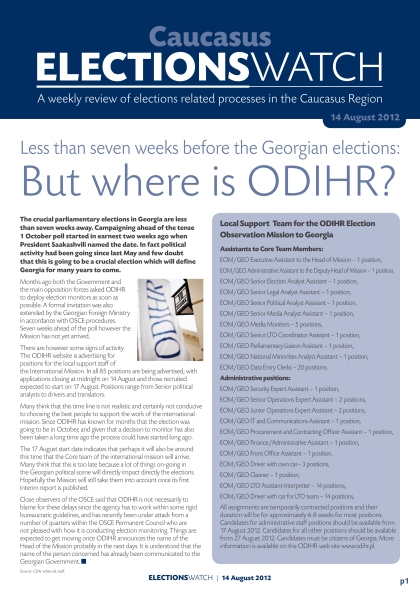