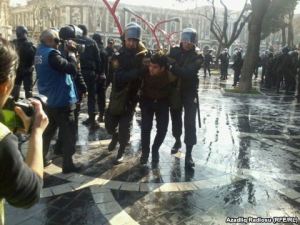 A protestor being detained in Baku on 10 March 2013. (Picture courtesy of RFE/RL)

Police tactics in dealing with street protests are often subject to criticism, in democratic countries as much as in totalitarian ones. The use of water cannon and rubber bullets is allowed under standard operating procedures in many countries. Usually it means that either the number of demonstrators was so huge that the police felt that they were losing control and that there was a threat to public order, or that the protest had become violent and there was danger to safety of citizens or property. It could also mean that the police were unprofessional or under instructions to use heavy handed tactics.

The protest held in Baku on 10 March was neither huge nor violent yet the police responded with tear gas, water-canon and rubber bullets, and arrested around eighty protestors.. The use of overwhelming force to break up a protest mainly by young people angry at the number of deaths in the Azerbaijani Army as a result of abuse by senior officers is a sign of the jittery mood in the Azerbaijani leadership ahead of presidential elections in October. The protestors were calling for the resignation of the Defence Minister. Amongst them were relatives of  some of the hundreds soldiers who died in the Azerbaijani military in non combat situations over the last years.

Azerbaijan is at a crossroads. The government has a choice: dialogue and reform or confrontation. It seems it has opted for the latter. If things do not change very fast the October election will be an irrelevance. The squeeze on the opposition continues; a leading Presidential contender, Ilgar Mammedov, is in jail; and the space for peaceful dissent shrinking by the minute. END_OF_DOCUMENT_TOKEN_TO_BE_REPLACED

Political activism in Azerbaijan continues to search for ways of expressing itself in an environment that whilst not being totalitarian, leaves little space for the expression of dissent.

For many years street protests were the way that Azerbaijanis vented their political opinions. But opportunities for that have become increasingly limited, with the government restricting public demonstrations, and banning them completely from the centre of the capital, Baku.

Despite technical and financial problems, several anti-government newspapers continue to publish. Journalists report harassment of all forms, especially when reporting on corruption, but many remain undeterred.

In recent years many young activists have taken to cyberspace, where many young activists now blog regularly in Azerbaijani, English Russian and other languages, connecting not only with their own compatriots at home and abroad, but also internationally. The government has by and large tried to ignore this phenomena, using positive methods to counter it, largely by strengthening its own on-line presence.

Youth groups have become increasingly active and increasingly artistic in their methods. Increasing international attention has made the Azerbaijani government more sensitive to the way it handles dissent, and there are some signs that “soft policing” may be more in fashion now. Both sides however are testing the water. END_OF_DOCUMENT_TOKEN_TO_BE_REPLACED